Information on Battle of Bataan 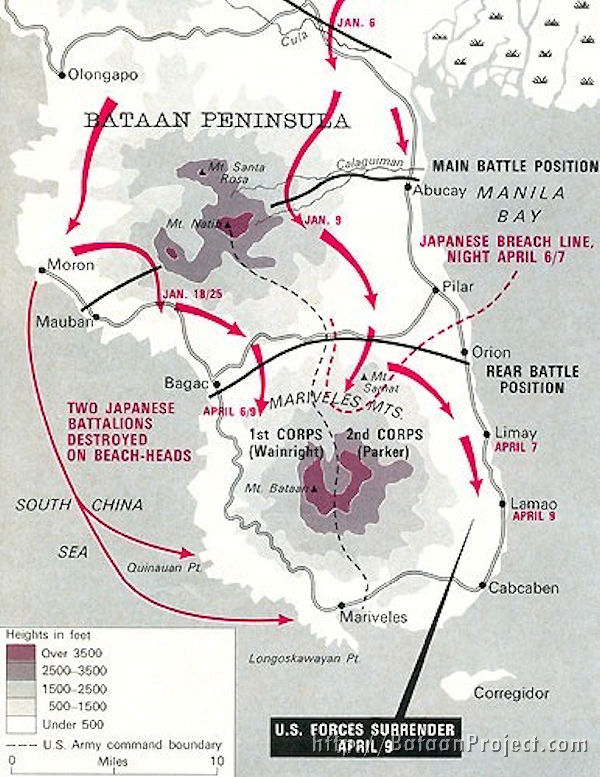 Key battle of the failed American defense of the Philippine Islands between 1941-1942. Bataan is a peninsula on the big island of Luzon; it is some 25 miles long and roughly 20 miles wide and extends south into Manila Bay. The peninsula figured prominently in General Douglas MacArthur's plans for defending the Philippines against a Japanese invasion. The original plan called for U.S. and Philippine forces to withdraw into the Bataan Peninsula and there fight an extended defensive battle until reinforcements arrived from the United States.

More than 20,000 Americans and Filipinos perished in the campaign, and roughly 2,000 escaped tot he nearby island of Corregidor and fought on until they in turn were forced to surrender on 5 May. The 76,000 prisoners of war of the battle of Bataan - some 64,000 Filipino soldiers and 12,000 Americans - then were forced to endure what came to be known as the Bataan Death March as they were moved into captivity.  They had succeeded, however, in delaying the Japanese conquest of the Philippines for 148 days and briefly inspiring the Allied cause during the dark early days of U.S. participation in World War II.